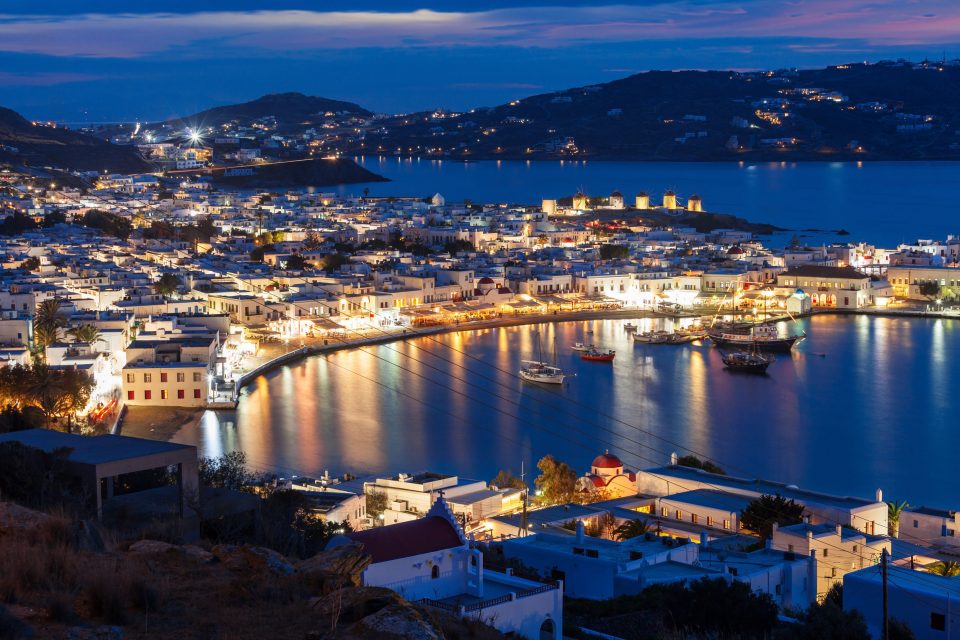 Posted at 14:07h in General by controller

Charter a private jet to the beautiful holiday island of Mykonos with Falcona. A popular destination for the rich and famous during the summer months.

Mykonos is an island popularly known for beaches such as Paradise and Super Paradise have bars that blare thumping music. Massive dance clubs attract world-renowned DJs and typically stay open well past dawn. It’s known for its vibrant night-life and for being a gay-friendly destination.

With its stunning beaches, fine dining, designer shopping and fabulous parties, this picturesque Aegean island was recently described by Tatler magazine as ‘the chicest of all the Greek Islands’. Just a few hours away by private jet, Mykonos is often in the spotlight thanks to its party-seeking set of A-list visitors. As well as being a fantastic destination for round-the-clock buzz, Mykonos also offers visitors a tranquil escape or a mix of the two.

THE BEST NIGHTLIFE ON MYKONOS

In Mykonos Town, an evening of revelling typically begins with a sundowner at one of the Little Venice district’s many bars. The party crowd then heads to Cavo Paradiso at Paradise Beach, the island’s premier out-of-town club in a gorgeous open-air venue.

The all-day, all-summer party beach scene is big on Mykonos. Paranga is one such beach, where the fun begins in the afternoon and continues into the early hours and beyond.

The Little Venice District in Mykonos Town is where the most western part of the town meets the water – quite literally. The Agean sea laps at the edges of the whitewashed buildings whose balconies overhang the water.

The Kato Myli windmills are another instantly recognisable and photogenic attraction. The iconic constructions stand in a gleaming white row, looking out to sea above Little Venice.

As well as sightseeing, sun-seeking and partying, Mykonos is well known as a luxury shopping destination. The island is home to an array of glossy boutiques and jewellers stocking unique local brands as well as international designer labels. Louis Vuitton and Dsquared2 both have stores on the island, whilst designer boutiques such as Linea Piu in Psarou Beach stock a dazzling range of top global brands.

THE BEST BEACHES ON MYKONOS

Ornos Beach is on the south western coast. Its powder-soft golden sand, safe, crystal clear waters make it a favoured mooring spot for super-yachts. Psarou is another popular superyacht stop-off. Reached by road or by water taxi from Ornos, Psarou beach is sheltered and safe with family-friendly shallow water.

Paraga and Paradise Beach are all-day party beaches, where the fun begins in the afternoon and continue into the early hours and beyond.

Elia beach is renowned for its long strip of fine sand and clear water. As well as a range of superb restaurants, the beach has a watersports centre with water-skiing, parasailing and windsurfing.

This property is described as a romantic oasis, a heavenly sanctuary where design meets sheer relaxation. The hotel offers spacious suites, a tranquil pool lounge and Mediterranean-inspired cuisine. Top choice for luxury and privacy. A stroll or short drive away from the famous windmills and the Little Venice district.

The Royal Myconian Resort sits above a private bay at Elia Beach. An exclusive, family-owned, world-class resort, it boasts classic white-domed architecture, breathtaking views and personalised service. The spacious rooms have sea views and verandas making this hotel a first choice for the discerning visitor.

The Royal Myconian’s sister hotel describes itself as a paradise where barefoot luxuries abound. Guests enjoy access to a private section of Elia beach. Guests in the hotel’s Grand Executive suite enjoy a private pool, a sun-soaked terrace and captivating sea views.

The Belvedere Hotel comprises a collection of seven delightful whitewashed buildings nestled into a hillside overlooking Mykonos town and the sparkling Aegean Sea.

With two restaurants, two cocktail bars, a spa, and a state-of-the-art fitness facility, the hotel is a stylish refuge, just a five-minute walk from the lively town centre.

Arrive in Mykonos in style, by direct private jet from Manchester airport. The island’s airport is located near Mykonos Town and Mykonos private jet passengers use the airport’s commercial terminal.

As a private jet passenger, you are greeted at the Information Desk by a member of staff who will expedite passport and customs clearance. Further assistance such as concierge or limousine services may be arranged, if required.

It is advisable to book private jet flights to Mykonos as far ahead as possible as the airport, which is also known as Hephaistos (or Ifestos) Airport, is very busy during the summer months and private jet slots can be limited.

Depending on your itinerary you can be airborne within just a few hours from your initial enquiry.

All this means that you can significantly reduced your stress levels by spending less time at the airport – without the lines, waiting, lost luggage, transfers, delay concerns or security issues of commercial flights you’ll be a lot more relaxed.

Mykonos Airport is located 4 kilometres (2.5 mi) south-east of the town of Mykonos and it is served by international flights during summer. The sparse facilities at Mykonos Island National airport do not operate a separate private jet terminal.

It’s extremely busy during the summer months and private jet slots can be limited – so we advise booking as far ahead as possible.

Falcona has access to the best aircraft around the world. All are manufactured from the year 2000 onwards, so you know that you’re flying on a faster and safer aircraft, with amenities for you and your family to enjoy en-route to your destination.

For a flight to Mykonos we recommend a super mid size aircraft such as the Embraer Legacy 500, due to its range, stand up cabin and large luggage capacity.

The Embraer Legacy 500 is  one of the fastest private jets in its class.

The aircraft seats up to nine passengers in elegant-yet-practical seating that converts into fully flat berths At 110 cubic feet, the main baggage compartment is the largest in class and complements a generous in flight-accessible baggage compartment and cabin stowage space.

Optimally placed windows, ergonomic seating and cabin technology, create total elegance in the cabin.The cabin seats swivel, offer lateral, forward/aft movement. The Legacy 500 brings comfort, technology and performance that will enable you to have a premium flying experience. its class.

Landing at short fields is the Legacy 500’s speciality, with just (647 m) need to land safely, which is significantly less than it’s main competitors. This gives the aircraft an advantage meaning it can land at more airports, than others in its class.

Travelling with children can be stressful at the best of times, so chartering a jet allows you to turn up fifteen minutes prior to your departure. You and your family can enjoy a spacious cabin all to yourselves. It’s a hassle free way to travel with your family.

You can park in a secure and private car park, directly outside the private terminal. At reception, you’ll be greeted by a member of the staff, who will check you in, take your details and car keys if you’re returning later that day or a couple of days later, if required.

When it’s time to depart, you will be escorted through the private security screening area ( if you’re travelling on a larger private jet) and then you can walk directly to your aircraft.

On your arrival in Mykonos, the moment you step off the aircraft, a member of the staff will be there to meet and greet you. Once there, we will assist you through all the formalities of Immigration and Customs.

This takes just a few minutes compared to a commercial flight. In the meantime, all your luggage will be taken from the aircraft, directly to your chauffeur car outside the front terminal.

Falcona Private Jets has been based at the only dedicated FBO jet centre in Manchester since 2014, with its own VIP private passenger terminal, which enables us to meet our clients on arrival, ensuring that all our charter flights run as smoothly as possible.

Unlike most charter brokers we like to take a hands on approach with our clients and get to know them on a personal level, which is rare in this industry.

You can enjoy the free WiFi, printing, scanning, charging points, newspapers, magazines and TVs. Take some time out with your favourite book, catch up on sports or simply sit back and relax prior to your flight.

There is secure customer parking and a dedicated ramp area in front of the Jet Centre, which gives immediate access for customers. Your keys will be taken by the receptionist on your arrival and your car will be brought round to the front when you return. Bags unloaded and then put straight into your car for a swift getaway.