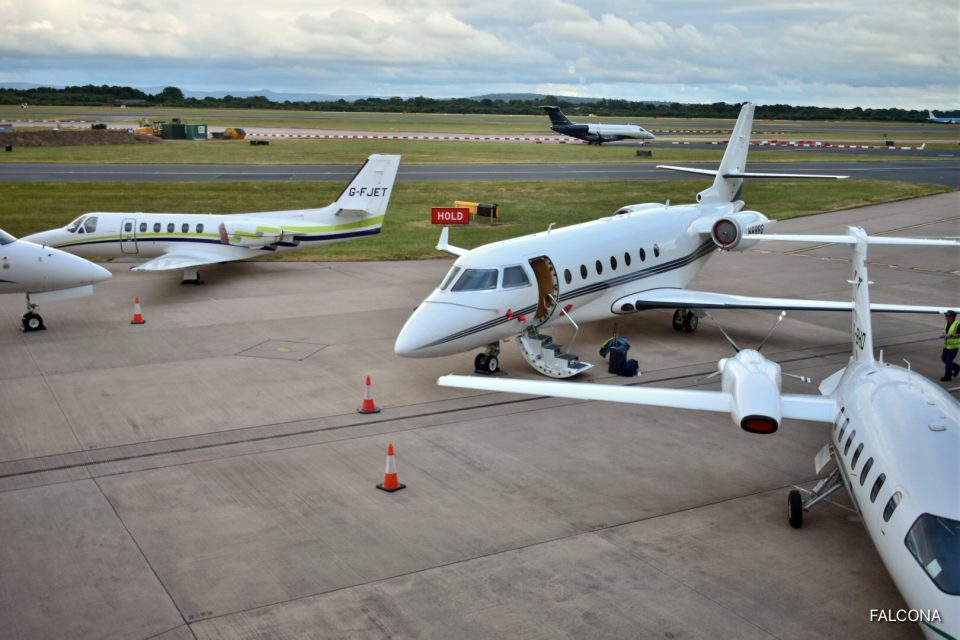 Posted at 12:54h in General, Latest News by controller

Flying by private jet to watch a football match in the Premier League, Champions League or Europa League allows you to travel at a time that suits you. Arrive at the closest airport to the match. On arrival you will be whisked in a luxury chauffeur car straight to the ground.

Falcona specialise in private jet travel for football matches around the UK and Europe. For internal Premier League matches a private jet flight can save you a lot of time travelling. Get to the airport just twenty minutes prior to departure, immediate boarding with no delays.

Most private jet charter flights from Manchester to other parts of the UK take approximately 45 minutes; to Newcastle, London and further afield matches against Bournemouth and Southampton take just under an hour.

From Manchester to London by train is just over two hours and there are risks of delays and cancellations, also with night matches sometimes there are no available trains to get you home.

A car journey takes more than double the time plus you will have traffic and road works too contend with. Manchester to London takes approximately three hours thirty minutes , so it would be at least a seven hour round trip driving.

So whether you want to return home after the match or stay overnight and fly home the next morning, the choice is yours. Private jet flights are all about convenience and flexibility.

Here are some of the private jets that flew into Manchester Airport for the Premier League match between Manchester City and Arsenal.

A ultra long range Gulfstream G650. A top of the range private jet that seats up to 16 people in a spacious cabin. Capable of flying for up to 13 hours, China to Manchester is well within its range.

As we’re a charter broker, we can source the right aircraft for your journey, from our professional database of operators around the world.

So whether you want to fly in from the Middle East on a Global 6000 or a Embraer Phenom 300 for an internal flight in the UK to watch a game Falcona will organise the perfect jet for you.

For category A Premier League matches, we get a variety of aircraft that fly into Manchester with supporters, CEO and Chairman of football teams.

We have found that supporters prefer to travel on super light aircraft such as the Cessna Citation XLS or Bombardier Learjet 75.

Whilst the CEO and Directors tend to charter slightly larger aircraft such as the Bombardier Challenger 350, which offer more cabin space and on-board technology, allowing them to work en-route to the game.

Chartering a private jet can cost anywhere between £1,500 – £10,000 per hour, depending on the size of the aircraft and where you’re travelling from and to.

As private jets are priced per hour, the cost remains the same regardless of how many people are travelling.

To book your flight to a football match, please get in touch with us, so that we can organise your travel needs.

Please note: Any additional operational charges that we may incur to operate this quoted schedule, ie Out of Hours (OOHs) and airfield Extensions, Fire Cover Upgrade and AIRCRAFT DE-ICING are not included in this quotation price. This estimated price is subject to availability, slots, traffic rights and schedule.